Kit Siang, Gobala investigated by cops
May 30, 09 2:22pm
Two opposition leaders are being investigated by the police in connection to the speeches they made while campaigning in the Penanti by-election.DAP supremo Lim Kit Siang provided a statement to the police this morning at his house in Penang following a report lodged against him for “sedition and criminal defamation” of Prime Minister Najib Abdul Razak.

According to Lim, chief inspector Pang Meng Tuck had lodged a report against his speech in Guar Perahu, Penanti on May 24.“In my speech, I blamed Najib (Abdul Razak) for the Perak power grab and for compromising the credibility of one national institution after another,” recalled Lim, who is Ipoh Timur parliamentarian, in this Twitter posting.

According to Lim, he also spoke of the Royal Malaysian Police, Election Commission, Malaysian Anti-Corruption Commission, the civil service and the judiciary being made to serve Najib's political agenda. “In Najib's Malaysia, speaking the truth has become sedition and criminal defamation. Darkness is descending on Malaysia,” he said after his one-hour session with the police. “Malaysians must not be cowed," he adds.

The veteran opposition leader was accompanied by his son, Penang Chief Minister Guan Eng, and DAP MP-cum-lawyer Karpal Singh at his meeting with the police.Lim said that a few police officers went to a DAP ceramah at 11.40pm yesterday to inform him about the investigation.

However, Lim was on stage giving a speech at that time, and Guan Eng, who was also there, had to negotiate with the police to fix an appointment for a statement could be recorded on the matter.
Gobalakrishnan to go to police station.

Meanwhile, Padang Serai parliamentarian N Gobalakrishnan has also been summoned by the Bukit Mertajam police over a speech where he mentioned Najib’s link to the murder of Mongolian woman Altantuya Shaariibuu. 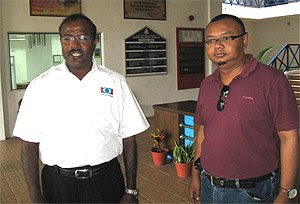 Accompanied by lawyer Ahmad Nizam Hamid, Gobalakrishnan arrived at Seberang Perai Tengah police districts headquarter at 3.30pm and was quizzed for about an hour."I was asked to come to police station because the police want to take statement regarding two reports lodged by police officers," he said.

The two police reports were against Gobalakrishnan’s for three speeches on May 27 and 29, which he made as part of his campaign for PKR candidate Mansor Othman.Gobalakrishnan said that the questions were mostly confined to whether he had spoke about Altantuya’s murder and about V Sivakumar being ousted as Perak speaker.

“It seems like Altantuya is haunting Najib and the Barisan Nasional government,” he saidGobalakrishnan said he was being probed under the Sedition Act and Section 500 of the Penal Code for criminal defamation, adding that Najib was using the police to silence the opposition. "The police has been used by Prime Minister Office’s to frighten us. They don't want us to talk about Altantuya, Najib, Rosmah, and many other things," he said.However, he said this episode would not deter him for further unraveling the ‘truth’ on the murder.
Posted by ahmadnizamhamid at Monday, June 01, 2009